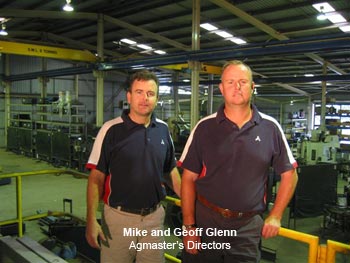 Along with making Agmaster products in the early days, Mike and Geoff were heavily  involved with promoting the concept and they ran extensive seminar programs through Western Australia, then expanding through to the cropping regions of Eastern Australia. They brought with them farmer experiences and researchers from W.A. to promote this new "No-Till" farming which in just a short few years became the major form of cereal crop establishment in Australia.

As their business was only just starting this was a huge undertaking which had a great result for many farmers who took on this new technology.

In 1997 Agmaster introduced No- Till Star Harrows as a non-aggressive levelling attachment. Later, a steel coil harrow was developed to suit wet and sticky sowing conditions. These fit the same carrier arm as the star harrow and has proven to work well across many soil types.

1998 saw the introduction of Slip & Clip Points – the quick change option that allowed different size points and adaptors to be used in a common holder.

Agmaster Presswheels came to the market in 2002. Their unique self tracking and independence pressure capabilities have seen over 60,000 of these manufactured.

By 2013 Agmaster had developed it’s Seeker Boots that split the seeding row into 2 rows approximately 8 cm apart and landed the seed onto firm shoulders for enhanced seed-soil contact and quicker germination.

2018 sawthe release of Multi-Boot systems that that brings together all of the previous seed placement boot options (paired-row and single-row) that can be interchanged on a common boot mount.

Agmaster is continuously developing it's product range to meet customer requirements and the ever-changing agricultural landscape.